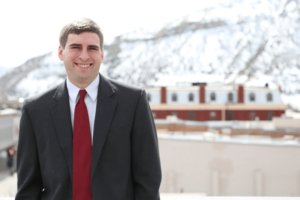 A native of Durango, Hugh Boles attended the University of Colorado at Boulder where he received his Bachelor’s degree in International Affairs with an emphasis on Latin America. After graduating from CU, Mr. Boles enrolled at Drake University Law School, in Des Moines, Iowa, where he earned his Juris Doctorate and received certificates in Constitutional law, Public Service, Litigation and Alternative Dispute Resolution.

Mr. Boles takes immense pride in practicing law in his hometown and surrounding communities and has been practicing in the La Plata, Montezuma, and Archuleta County Courts since 2011. Throughout his time practicing law, Mr. Boles has primarily focused his practice on the areas of Domestic Relations, Estate Planning, and Civil Litigation. Prior to founding the Law Office of Cox and Boles, L.L.C., Mr. Boles was an associate attorney with the Bopp Reynolds Law Group from 2015-2017, and The Law Firm of Lisa Ward from 2011-2015. Mr. Boles further worked for the Durango law firm of Casey & Casey, LLC during the summer of 2009, specializing in Insurance Defense; and for the La Plata County District Attorney’s office in the summer of 2010 as a student attorney, prosecuting felony and misdemeanor criminal offenses. Throughout these varied experiences, Mr. Boles has obtained knowledge of the particular issues that must be carefully addressed and considered in trial practice, as well as the patience and foresight to utilize alternative dispute resolution to obtain amicable solutions when very emotionally taxing litigation is unnecessary.

I can’t say enough good things about Hugh Boles. When my case started I had no idea what to expect,
however at every point his expertise made me feel confident and comfortable with everything involved
in my case. I truly felt that he was genuinely invested in my case, and in no way did I ever feel like just a
“client”. He is responsive, professional, sincere, and ethical, all traits that I find very important in legal
counsel. I was so impressed and satisfied by his legal services, that I have personally recommended him
to a couple acquaintances of mine knowing well and good they would be in good hands.